Alfred Wainwright published the first of his seven Pictorial Guides to the Lakeland Fells in 1955 and he can’t have anticipated the impact these small-format guides would have decades later. His classic books, with their distinctive hand-written typography and sketches, have been incredibly popular. They were revised quite recently but the 214 Wainwrights remain unchanged and Ambleside is surrounded by some of the best!

Given that we are on the corner of three of the Guide areas, Central, Eastern and Far Eastern, Elder Grove B&B is a fantastic base for exploring the fells in Wainwright’s footsteps.

This Guide covers the area from Ullswater and Kirkstone Pass across to Long Sleddale and Haweswater. The fells around High Street are the highest, but one of our favourites, easily walked from Elder Grove, is Wansfell, which can be “bagged” on a circular walk that also includes the pretty village of Troutbeck (and its hostelries) in the neighbouring valley.

The walk over Wansfell (1581 feet) and back takes about 4-5 hours and we recommend the simple guide produced by Lakeland Leisure Walks as an explanation of the route. Starting on the Stock Ghyll footpath up out of Ambleside, alongside the waterfalls, the route then turns right to climb on a track and path clearly marked Wansfell Pike and Troutbeck to the summit.

Of course, you could just retrace your steps back to Ambleside but Troutbeck is worth a visit and we’d recommend descending from Wansfell through a metal gate and then a swing gate in a stone wall down towards the village. There’s a lovely old lane along through Troutbeck itself before turning north and climbing back via Jenkyn’s Crag above the A591 and into Ambleside. 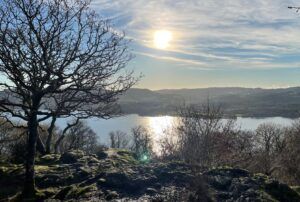 For a fuller description and notes, you can pick a copy up of the Lakeland Leisure Walks route in Ambleside and we have copies at the B&B for our guests too.

Fancy coming to stay in Ambleside for a weekend?

North of Ambleside – The Eastern Fells

Between the Kirkstone Pass and Dunmail Raise are some of the most impressive mountains in the Lake District – and a couple of the best airy ridge walks too. Helvellyn is the highest at 3118 feet and it can be approached from several directions, including the Thirlmere and the Ullswater approaches. It’s a big undertaking and unless you’re an experienced walker with good navigation skills and the right gear, not only for a long and a settled good weather day, the Thirlmere side is probably the slightly easier option. But it’s worth it! 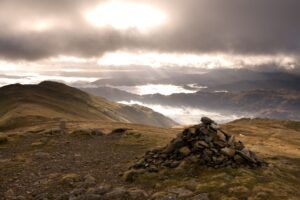 Almost as high is Fairfield (2863 feet) and the big attraction here is the Fairfield Horseshoe, a high ridge walk of some 11.5 miles. If you’re bagging Wainwrights, this route takes in eight of them in all and the walk can be done from our door. The route includes Heron Pike and Dove Crag and is a big favourite, especially in summer with the longer daylight hours.

But you don’t need to climb high to bag a Wainwright. Both Nab Scar and Stone Arthur are more accessible but with similar great views. Mind you, any fell walk should be taken reasonably seriously with strong footwear and a clear map.

Northwest of Ambleside – The Central Fells

Of course, we’re very biased but we think this area of the Lake District is one of the best for walking whatever your experience. The Langdale Pikes (Harrison Stickle and Pike O’ Stickle) stand out from wherever you are around Ambleside. They dominate the views from miles around but they’re a challenging walk and the summits are a bit of a rock scramble.

However, much closer to Ambleside is a real gem – Loughrigg Fell (1101 feet). It’s a complicated plateau on top but a fantastic introduction to fell walking with views in every direction from the trig point at the summit and on the circular route around the top. You’ll see the best of Windermere stretched out to the south, Langdale and those Pikes to the Northwest and Helm Crag with its unusual lion and lamb rocks to the north.

Again, we’d recommend the Lakeland Leisure Walks route card as a good place to start for the Loughrigg walk. It sets off through Rothay Park (just down Vicarage Road from Zeffirelli’s) before heading up hill to the trig point on Loughrigg Fell. The descent follows the same path initially before heading slightly further west to Todd Crag and then down past Lily Tarn to rejoin Under Loughrigg Lane and back into Rothay Park.

The route is just under 5 miles and should take a relatively fit walker about 2-3 hours to complete so it’s a lovely way to spend half a day if you take your time. It’s best done in good visibility (for safety and for the views) and, as the navigation can be tricky, probably with an Ordnance Survey map as well as the Loughrigg Summit walk route card.

Thinking about a spring walking holiday?

The Outlying Fell that started it all

Alfred Wainwright’s first view of the Lake District apparently came from Orrest Head, a small fell with a great view across Windermere to the Langdale Pikes and much more. He made the short climb from Windermere station and that view inspired him to visit the Lakes often (later moving to Kendal) and then to create his Pictorial Guides.

Orrest Head is clearly signposted up through the woods. The fell is featured in The Outlying Fells guide by Wainwright and it is also one of five routes featured in the Lakeland Leisure Walks “Five easy to follow walks around Windermere” pack, which we have in the B&B for our guests.

Basically, there is so much good fell walking within easy reach of Elder Grove B&B that it’s hard to cover it in a blog post. We’ve loved exploring the area and we hope you’ll enjoy finding out more and then exploring the fells using Elder Grove B&B as your base. We’re always interested in our guests’ experiences so, if you bag a Wainwright (or three) during your stay with us, please let us know how you got on so that we can pass on your advice to future visitors.

Notes: As well as the Lakeland Leisure Walks guides, we’d also recommend the Pictorial Guides to the Lakeland Fells, written and illustrated by Alfred Wainwright and revised more recently by Chris Jesty. There are also two great small guides in the Top 10 Walks series that have even more ideas for Ridge Walks (Carl Rogers) and Walks to Viewpoints (Stewart Smith).